Emergency Chiefs | Rising Emissions & Worse Fire Danger Vicious Cycle - Image Credit: Pixabay Australian bushfires are forecast to contribute to record high levels of carbon dioxide in the atmosphere this year. Mike B ...
Mobile Skate Ramp And Movie Night - Fun box packed away and ready for transport. Image Supplied Grab your BMX bike, scooter, or skateboard and head along to Rigarlsford Park on Satu ...
'Darkest summer' in history as NSW burns - The devastating NSW bushfire season which has claimed the lives of more than 20 people has been described as the "darkest summer" in the sta ...
Alex Glenn unveiled as new Broncos captain - Coach Anthony Seibold says Darius Boyd will remain an integral part of Brisbane's leadership group despite being replaced as captain by Alex Glenn for ...
China coronavirus death toll mounts to 25 - A new coronavirus has killed 25 people in China and infected more than 800, the government says.
Motorbike And Car Collide, Fairy Bower - A motorbike and car have collided at Fairy Bower. The accident happened on the Capricorn and Bruce Highways at 8.45AM on Friday. The rider was tak ...
Body search widened after Qld plane crash - Authorities have widened a search for the bodies of a couple presumed dead in a light plane crash off Brisbane.
Titan Taylor mentally ready for NRL return - Fit and mentally strong, Ash Taylor appears a player reborn ahead of the 2020 NRL season.
Border minister backs coronavirus response - The man responsible for Australia's borders has defended the national response to the coronavirus.
Woolworths Recalls Cheesecake Over Nut Allergy Fears - Woolworths is recalling its own brand cheesecake, amid fears it could spark a nut allergy. All batches of Woolworths Free From Gluten Dairy Free ... 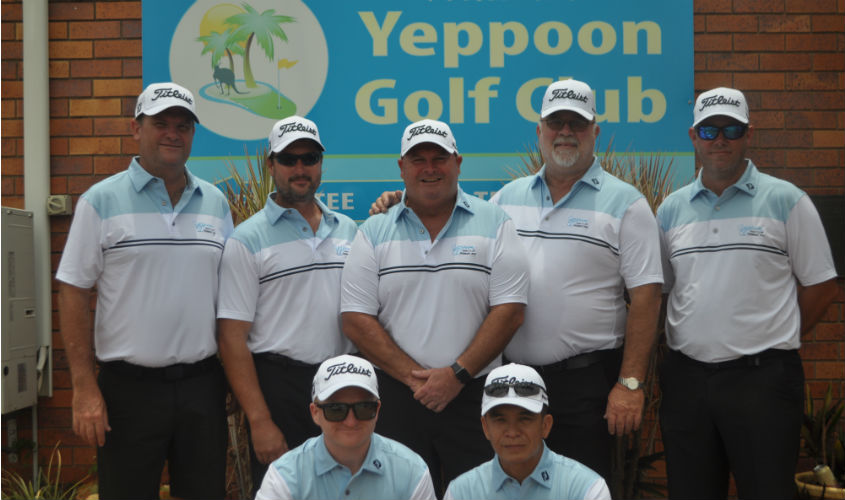 A photo of the combined team.  Image Supplied

Action has resumed at the Yeppoon Golf Club in 2020.

The venue hosted the first round of the inaugural men’s inter-club pennants in the Keppel zone of golf central Queensland.

Yeppoon took on Rockhampton in Round One on Sunday and found themselves finishing on eight points and in the lead by just two points.

The event, played in two divisions, saw Yeppoon’s division one team finish on 4 ½ points against Rockhampton on 2 ½ points. And in the second division Yeppoon and Rockhampton both finished on 3 ½ points.

On Sunday January 19, Rockhampton will have a chance to recover these lost points in the second match in round one when they come up against Emu Park Golf club at their home course of Rockhampton.  Play will commence at 12 noon.

The youngest player in the teams was Isaak Jensen 13 years and Oldest Terry Bulger 75, both of Yeppoon with both scoring wins

Team captains Tim Mc Master Rockhampton and Trevor Tougher in an address to all players thanked them all for their participation in this inaugural Central Queensland event with Tim congratulating the Yeppoon golf club for the way their course was presented and are looking to reversing the result when the meet Yeppoon in the second round at their club in February.

Golf Central Queensland secretary Gurney Clamp also in address to all players is that Golf C Q is looking at becoming involved by organizing an inter-zone pennant match between Keppel and Curtis zones, Golf C Q is also have the wheels in motion to organize an inter-district pennant match against North Queensland.