Man stabbed to death in Tamworth - A 21-year-old man has been stabbed to death at Tamworth in northeastern NSW.
Interstate designer bag thief nabbed - A man will face court accused of stealing more than $50,000 worth of designer handbags and other items from retail stores in Sydney and Melbourne.
Face spray-painted during Adelaide robbery - A man is recovering in hospital after having his face spray-painted during a street robbery in Adelaide.
Charges laid over Sydney assault - A teenager has been charged over an assault in Sydney's inner west, which left a woman in hospital and two other people injured.
Latest snapshot of the coronavirus impact - LATEST DEVELOPMENTS* Victoria recorded 450 new COVID-19 cases and 11 more deaths on Friday.
Bennett fined $20,000 for bubble breach - Wayne Bennett's Italian lunch date will cost him $20,000 to go with his two weeks away from his players after the NRL came down on South Sydney's mast ...
Police appeal for witnesses of serious crash near Miriam Vale - Investigators are appealing for witnesses following a serious traffic crash at Gindoran near Miriam Vale earlier this week. Around 11.15pm on ...
Business backs further JobKeeper revision - Business groups believe the federal government's latest JobKeeper changes aimed at virus-hit Victoria will ensure more people stay in work.
NSW urged to limit activity, 11 new cases - NSW residents returning from coronavirus-hit Victoria must now undertake two weeks of hotel quarantine, while young people across the state are urged ...
Rain falls across parts of Queensland - The Weather Bureau says it due to a trough, which moved in from the Northern Territory to Western Queensland. It can now be seen on the rada ... 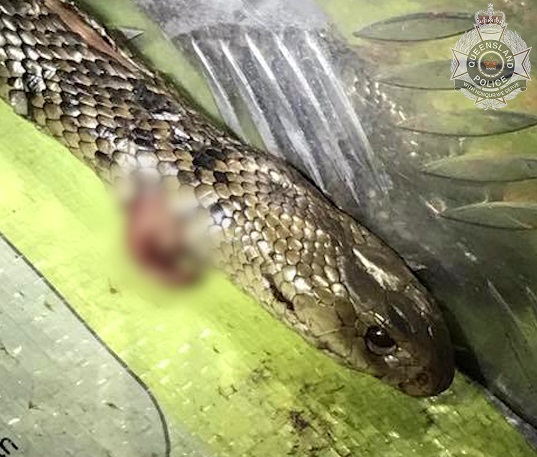 Imagine driving along a regional Queensland highway alone when you spot an angry brown snake slithering towards your leg.

With his heart-racing uncontrollably, 27-year-old Gladstone man ‘Jimmy’ experienced just that while driving at 100km/hour on the Dawson Highway west of Calliope around 5pm on June 15.

“…And the more I moved my legs… it just started to wrap around me. Its head just started striking at the (driver’s seat) chair, between my legs.”

Jimmy used a seat belt and a work knife he had in the ute to fight off the snake off while trying to stop the car.

Fearing he had already been bitten and his life was in danger, Jimmy believed he had no other option but to kill the snake and take it with him to hospital.

A local road policing officer spotted the utility travelling at 123km/h and quickly intercepted it.

Although the traffic officer had heard his fair share of excuses for speeding, he soon realised this was not just another colourful tale and promptly sought medical assistance.

Paramedics attended the scene and it was determined that Jimmy had not actually been bitten by the snake but was certainly suffering shock from the ordeal.

“It was pretty terrifying, I’ve never been so happy to see red and blue lights,” Jimmy said.

The eastern brown snake, is a highly venomous snake and one of the most deadliest in the world.

While this was a particularly unique situation, snakes are protected under the Nature Conservation Act 1992 and people should not attempt to capture or injure wildlife in Queensland. More information about what you should do if you encounter a snake on your property can be found here.