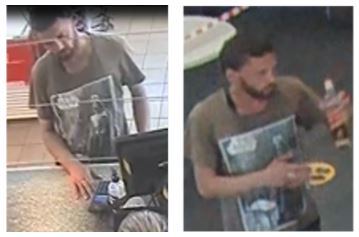 Police are seeking assistance to identify a man who allegedly assaulted a female employee in a fast food store in George Street, Rockhampton.

Around 5pm on June 26, a man entered the store on George Street and approached a female employee who was sweeping the floor.

The male began talking to the female employee, and then allegedly assaulted her.

Police said another employee and customer stepped in and asked the male to leave the store.

The male has then left and, upon exiting, allegedly kicked a glass door causing it to smash.

The male is described as having Caucasian appearance, proportionate-to-thin build, average height, brown hair, and an unkempt beard.

Police have released a CCTV image of the male as part of the investigation.

Anyone who recognises the man, or has any information in relation to this investigation, is urged to contact police (details below).

If you have information for police, contact Policelink by providing information using the online suspicious activity form 24hrs per day at www.police.qld.gov.au/reporting or call 131 444.

You can report information about crime anonymously to Crime Stoppers, a registered charity and community volunteer organisation, via crimestoppersqld.com.au 24hrs per day or call 1800 333 000.