New Zealand downgrades tsunami threat - New Zealand has downgraded its tsunami threat level, with the largest waves passing, its National Emergency Management agency says in its latest updat ...
Vigils mark anniversary of Tamil family's fight - Locals have met for a candlelight vigil this morning in Biloela, calling for a Tamil family to be released from detention. Today marks three yea ...
Shipping company fined for polluting Great Barrier Reef - A foreign shipping company and the chief officer of one of its vessels has been fined thousands of dollars for dumping garbage into the Great Barri ...
Vaccine rollout unaffected by EU jab block - Authorities are disappointed and frustrated Europe has blocked 250,000 doses of the AstraZeneca coronavirus vaccine from being sent to Australia but s ...
Covid ‘superspreader’ might have infected others in Qld hotel quarantine - Health officials are scrambling to find eight people who stayed on the same floor as a person with a highly infectious strain of coronavirus in a Br ...
Kiwis urged to evacuate after third quake - Tsunami warning sirens have sounded and thousands of New Zealanders on the North Island's east coast have evacuated to higher ground after a third ...
Tasmania on verge of euthanasia laws - Tasmania is almost certain to become the third Australian jurisdiction to legalise voluntary assisted dying after the legislation passed the state ...
Aust plays down EU vaccine shipment block - A box of AstraZeneca vaccines (EPA/Zoltan Mathe HUNGARY OUT) Home Affairs Minister Peter Dutton has declared Europe's decision to block 250,000 dos ...
First AstraZeneca virus vaccines are ready - The first doses of the AstraZeneca virus vaccines are ready to be administered, as leaders prepare for their next major meeting.
Teenager dies after being stung by box jellyfish in Qld - A teenager has died after he was stung by a box jellyfish in Far North Queensland. The 17-year-old was stung at Patterson Point, near Bamaga about ... 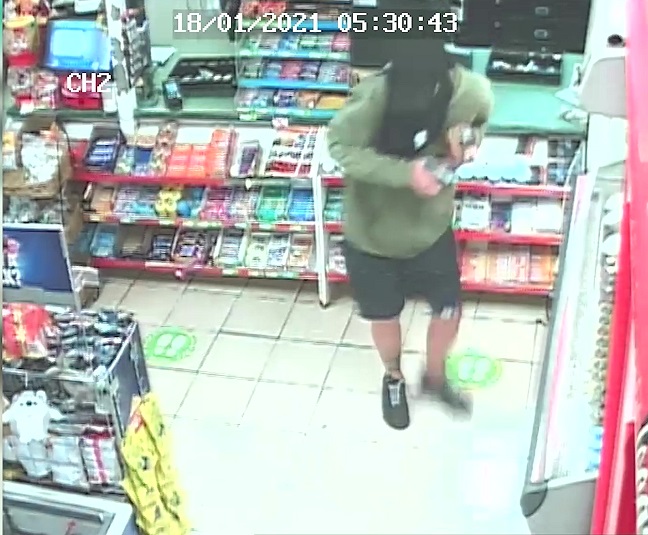 Police are appealing for public assistance to identify a man who robbed a Rockhampton supermarket yesterday morning.

Around 5am the man, pictured, entered the Lakes Creek Road store in Koongal and demanded money and cigarettes.

The two shop attendants complied and handed the man a sum of cash and cigarettes.

The man fled the store in a light bronze coloured sedan which was last seen heading towards Emu Park.

The man is described as Caucasian, skinny build and around 170cm tall. He was wearing a black cap and a black bandanna that was covering his face and a khaki green, long sleeved jumper.

A car was later found burnt-out near the Parkhurst water tower and detectives are investigating whether it is linked to the incident.

Investigators are calling on anyone travelling with dash cams in the area of Lakes Creek Road shops between 5am and 5:15am and the Parkhurst area Mclaughlin Street, Birbeck Road, Boundary Road area near the water tower between 5:30am and 6am.